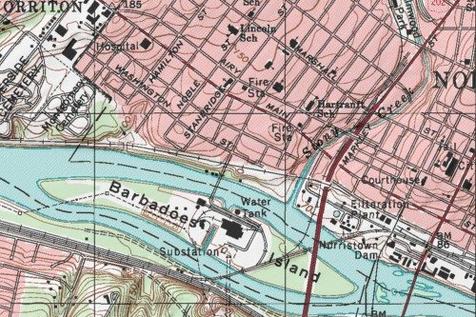 In the 1700s, the University of Pennsylvania acquired title to Barbadoes Island. The name of Barbadoes Island may reflect a trade relationship between Philadelphia and Barbadoes, an island in the West Indies that was also under British control at one time. Wealthy planters from the Caribbean-isle sent their children to Philadelphia to be educated.

Island, where he farmed the land and built a farm

carried excursionists to the island and up to

Phoenixville from a wharf in Norristown.   Of

The island was purchased in 1922 by Counties Gas and

Electric Company (PECO).  A power plant was constructed on

the island in 1926.  The plant was originally coal-

powered, then converted to diesel power in the 1970s.

It was operated by the Philadelphia Electric Company

(PECO/Exelon) until 1997. The PECO facility was most recently

used for equipment storage, company training and as an

Barbadoes Island A Hot Spot For Recreation In Early 1800s?

In the early 19th century, when there was little in the way of popular recreation, Barbadoes Island in the Schuylkill at Norristown passed as a resort of sorts.

Scrapbooks and maps owned by the Historical Society of Montgomery County show that a small park was established at the north end of the 90-acre island in the first decade of that century.

Although access to the island was by ferryboat only, horse racing and militia parades were held regularly during the summer months before 1820.

In later years, floating baths - fence-like, wooden enclosures used for swimming - were built by a local businessman, Lewis Schrack. The baths had stone flooring and gaps in the wooden sides for the river water to enter. Schrack also had boats and fishing tackle for rent.

Schrack was hoping to lure business from Norristown residents as well as travelers who were "passing through the area on their way to Yellow Springs, Reading or other summer excursions," according to a newspaper account of the time.

This activity must have been successful enough for others to venture to use the island for expanded recreational activities.

From about 1840 to the end of the century, pleasure steamboats carried visitors back and forth, bringing visitors from a wharf built at the foot of Barbadoes Street in Norristown. Regular stops included both the island and Phoenixville. The fare was 25 cents each way, half price for children. The shorter trip around the island, stopping at the park, was just 61/2 cents, children half-fare.

A local mechanic, Jacob Custer, designed and owned the steamboat that first was used on these excursions. It had an unfortunate design.

The boat was a side-wheeler that had a tendency to wobble, causing seasickness. When it docked at the Norristown wharf, the boat tended to tilt while loading passengers. After a few years, the boat was replaced by one with a more stable design.

One of the notable events at Barbadoes Island came in August 1849, when President Zachary Taylor named a day of celebration to mark the end of the Asiatic cholera epidemic. Although few deaths occurred in our region, local newspaper reports said there was a "grand fandango on the island."

There is some question of just when and how Barbadoes Island got its name.

Early 18th-century maps at the historical society use the name for the island, which was part of the Penn land grants of the late 17th century.

The West Indies island of Barbados and Philadelphia, both of them British colonies in the late 17th century, may have been linked by trade. Early 20th-century newspaper clippings about local trade with Barbados report that it dates back to the 17th century, and that many wealthy planters from the island sent their children to Philadelphia to be educated in colonial days.

If the origins of the island's name are a matter of conjecture, what we can certainly account for is the island's ownership from early times.

The land passed from Penn to one of his sons, who sold it to Isaac Norris and William Trent in the early 18th century. In the latter part of the century, Norris became the sole owner.

John Markley purchased the island in 1800, years after the original land grant was subdivided. He cut down a great deal of timber, built a farmhouse and tilled the cleared soil.

Maps show that the Schuylkill Navigation Co., the canal builders, owned the island in the 1820s.

Isaac McHorse leased about 80 acres of the island in 1880 and produced a large wheat crop. The steam thresher for the wheat was ferried across the river to the island.

In 1922 the island was purchased by Philadelphia Electric Co., which has owned it ever since. From 1923 to 1978, there was a generating plant on the island. A substation remains there today.